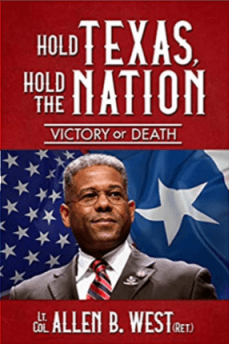 People who read Lieutenant Colonel Allen West’s new book Hold Texas, Hold the Nation: Victory or Death may hear the voices of some of the many conservative thinkers who doubtlessly have influenced him.

Some may hear echoes of Thomas Sowell, for example; others may Milton Friedman, or Mark Levin, or perhaps even the French economist often quoted by West, Frédéric Bastiat.

But the voice I heard while reading Hold Texas, Hold the Nation: Victory or Death was that of U2 lead singer Bono. In fact, I’ve discovered that the two have much in common. They were born only months and a mere 4,000 miles apart, for example — one born in 1960 Dublin, the other in 1961 Atlanta. Both are known for their tours, although Bono has toured with a rock band, while West’s tours were with the military. Most significantly, both share a love for capitalism.

In 2012, speaking to a Georgetown University’s McDonough School of Business, Bono told the assembled students that “Commerce is real. That’s what you’re about here. It’s real. Aid is just a stop-gap. Commerce, entrepreneurial capitalism takes more people out of poverty than aid.”

Although Bono is speaking specifically about foreign aid, it is likely that he and LTC West would have reached a similar conclusion: if the challenge is to uplift people economically, the answer is not more hand-outs; the answer is “good old-fashioned conservative capitalism.”

LTC West’s defense of capitalism is well-timed. From the gubernatorial races in Florida and Arizona, to the House races in New York City’s 14th district and Detroit’s 13th district, to the 2020 presidential race; members of the Democratic Socialists of America (DSA) have become the leading voices of the Democratic Party. Even Democrats who are considered “mainstream” —  at least by our MSNBCNN media  —  have adopted the DSA’s platform; namely impeaching Trump, “Medicare For All,” impeaching Trump, open borders, global warming alarmism, and, of course, impeaching Trump. As our nation’s most prominent socialist, Bernie Sanders, points out, socialist ideas are now “mainstream.”

Nowhere is this more evident than in the state of Texas. As LTC West observes, “what the progressive socialist left sees in Texas is not its incredible success. What they see is an opportunity for continuous national electoral power. It all comes down to the vital political calculus of Texas.”

To underscore this observation, witness the adoration directed at the ultra-liberal U.S. congressman and Texan senatorial candidate Robert Francis “Beto” O’Rourke. He has “raised more money in three months than any Senate candidate ever has,” says CNBC. Celebrities write “I would like to meet you @BetoOrourke” on Twitter. He is even being considered to be a 2020 presidential candidate.

Yet, it is hard to argue that Beto O’Rourke is the most impressive Democrat running in 2018. One would think that it would be Stacey Abrams — a Yale law grad, an award-winning novelist, and a candidate to be our nation’s first Black female president — that would be the progressive media darling. She is, after all, as much as a socialist as O’Rourke, much more accomplished, has a more historic candidacy, and is more likely to actually win than Congressman Beto.

But Georgia only has 16 electoral votes. Texas has 38, which gives the state a whopping 14% of the electoral votes needed for a candidate to win the presidency.

With states like New Jersey, California, New York, and others already solidly blue, the left realizes that if they can put Texas in their column (and take it out of the Republican’s column), they can have, as LTC West says, “an opportunity for continuous national electoral power.”

The progressive socialist ideology has great benefits, the most obvious of which is that it’s an easy sell to the politicians who peddle it.  How hard can it be to win an election by promising free health care, free college, a guaranteed job, a guaranteed income, and a $50,000 nest egg to boot?

I’ve been known to wear a cow shirt to Chick-Fil-A to get a free sandwich on Cow Appreciation Day, so the appeal of all this free stuff is not lost on me. However, as LTC West reminds, us, free stuff comes with consequences:

The short- sighted economic policies of progressive socialists—promising to give constituents stuff with little to no strings attached—will focus on the immediate visible effect of a regulation or law. The wiser economic policies of conservatives will take into account the hidden impact of that regulation or law. What typically happens is that while the immediate consequence of a regulation is favorable, such as free health care for everyone, the ultimate consequences are harmful, perhaps even fatal. The shortsighted economist pursues a small present good, which is followed by greater damage. The wiser economist pursues a greater good, even though there’s a risk of a small present damage.

Perhaps the best way to study this conflict between the current uprising of socialism and American capitalism is by comparing and contrasting the states that best epitomize one of these ideals: California and Texas. As LTC West put it, “If Texas is an example today of a conservative state, California could be considered the definitive example of a state married to the progressive socialist ideology.”

LTC West explains the differences between these two behemoths in great detail and with his customary clarity, contrasting these states’ economic and political philosophies, how these differences affected their histories, and, of course, how they will affect each state’s futures.

In the end, the difference between the conservative attitude Texas has built its history and economy on in the past and the progressive socialist attitude coming in from California and elsewhere is a difference of opinion over who knows best for the citizens of our great country. Progressive socialists believe it falls to the government to make sure its citizens are happy, successful, and secure. Conservatives know that the individual is the best determinant and defender of his or her own happiness—and that government interference will just walk on over that in the long run.

Allen West makes no secret that he’d like to return to Congress representing Texas. As readers of Hold Texas, Hold The Nation: Victory or Death will attest, he makes a compelling case that Texas would be well-served by him.

LTC West has a thorough understanding of the state, as well as the conservative and capitalistic principles that have made Texas great. If there is indeed “an ideological fight for the very soul of America and for Texas,” and there certainly seems to be, then we could not ask for a better guardian.