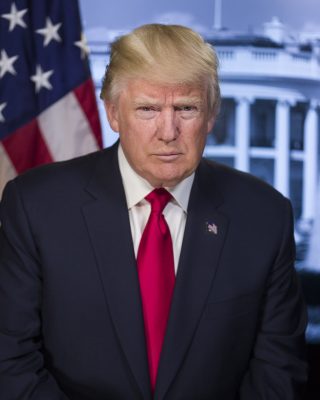 On January 20, 2017, at 11:51 am ET, Donald Trump delivered his first speech as American president.  With several former presidents — including the first Black president, Barack Obama — reportedly squirming uncomfortably behind him, President Trump spoke to the thousands gathered in attendance with these words, delivered the most pro-African American inaugural address in recent history:

Americans want great schools for their children, safe neighborhoods for their families, and good jobs for themselves. These are the just and reasonable demands of a righteous public.

But for too many of our citizens, a different reality exists: Mothers and children trapped in poverty in our inner cities; rusted-out factories scattered like tombstones across the landscape of our nation; an education system flush with cash, but which leaves our young and beautiful students deprived of knowledge; and the crime and gangs and drugs that have stolen too many lives and robbed our country of so much unrealized potential.

Although President Trump did not address African Americans specifically in this address, with this speech he addressed three of the great problems that continue to plague the Black community.

One of these great problems is, of course, crime.  In the city of Chicago, for example, a city which is inextricably linked to Barack Obama,  more than 750 people murdered in 2016, giving it more homicides than the more populated cities of Los Angeles and New York combined.

Furthermore, Chicago’s population is only 32.9% Black, according to the 2010 Census, yet 75% of its murder victims are African American.

Incredibly, the murder per capita rate is even higher in Baltimore and St. Louis than Chicago’s, as is the percentage of Blacks in its population, and again the vast majority of those murdered in these cities are African American.

Nationally, Blacks comprise roughly 50% of the murder victims, despite being only around 13% of the population.

Perhaps because 93% of Black homicide victims are killed by other Blacks, President Obama rarely expressed concern about the epic rate of violence in the Black community.

In his inaugural address, President Trump did just that.

President Trump also addressed another of the great burdens of the Black community: education.  According to the most recent report from the Economic Policy Institute [EPI]

“The chances of ending up in a high-poverty or high-minority school are highly determined by a student’s race/ethnicity and social class. For example, Black and Hispanic students—even if they are not poor—are much more likely than White or Asian students to be in high-poverty schools.”

This is significant for Black and other minority communities because, as the EPI adds, “[a]ttending a high-poverty school lowers math and reading achievement for students in all racial/ethnic groups.”

This results in the cycle of poverty commonplace in many inner cities, in which economically disadvantaged parents send their children to be under-educated at “high-poverty schools,” which contributes to the likelihood  that those children will eventually grow to be economic disadvantaged parents themselves.

Other presidents have referenced the problem of poor schools — President Obama simply mentioned in his 2009 inaugural address, “our schools fail too many,” for example. But only President George W. Bush — who said in his 2001 inaugural, “the ambitions of some Americans are limited by failing schools and hidden prejudice and the circumstances of their birth” — has referenced the linkage of under-education and poverty before President Trump.

Since, as mentioned, these failing schools are disproportionately Black, African Americans have reason to cheer President Trump’s comment.

President Obama, for example, in his second inaugural address, told his fellow Americans, “our journey is not complete until we find a better way to welcome the striving, hopeful immigrants who still see America as a land of opportunity,” with no acknowledgement of the price of this immigration upon many Americans.

But as Harvard professor George J. Borjas points out in Immigration and the Economic Status of African-American Men, a paper written with Professors Grogger and Hanson, there is a cost to immigration, and that cost is often paid by Black Americans:

In contrast to President Obama, President Trump promised in his inaugural that “every decision on trade, on taxes, on immigration, on foreign affairs will be made to benefit American workers and American families.”

President Trump will continue to find his relationship with African Americans to be, in a word, problematic. As during the administration of one of Mr. Trump’s supposed influences, Ronald Reagan, many Blacks will continue to  criticize President Trump for not being inclusive enough. They did during the 2016 RNC convention, as well as when he made his cabinet picks. Others will criticize him when the president does reach out to the African American community, even going so far as to attack Blacks receptive to speaking with him.  Many of these criticisms are valid; some aren’t.

We can only hope that if he continues his focus on inner-city crime, poor schools, and illegal immigration, the Trump years will be remembered as a good time for Blacks as well.