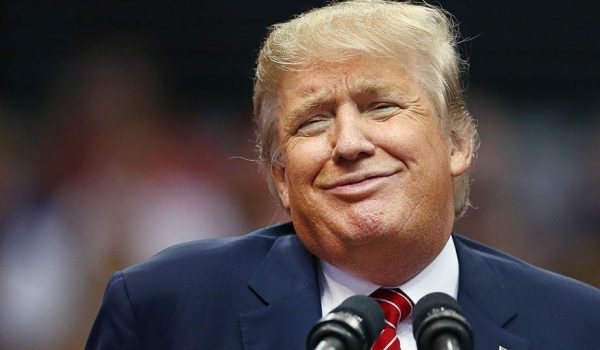 On May 3, 2016, not long after Senator Ted Cruz suspended his presidential campaign, Donald Trump gave a speech that was likely chilling to Conservatives already devastated by Cruz’s defeat.

In this speech —  that sounded as though it was being delivered by a king-in-waiting rather than by a presumptive Republican nominee — Donald Trump the First regally decreed:

Although Conservatives may argue for incentives to, say, convince Ford to build their next auto plan in New Mexico rather than San Luis Potosí, Mexico, few things are more antithetical to Conservatism than the government using warnings of “consequences” to compel a private business to do so. Yet Trump shows no hesitation against issuing such threats. He feels similarly entitled to “take a look at” the minimum wage businesses are to be allowed to pay its employees, and even at the right a private homeowner has to keep his or her home if a private business believes it can make profitable use of the land where the home sits.

Clearly, Trump is no Conservative. Instead, his core political belief is Trumpism: a philosophy that is a mix of progressivism (with all of its inherent authoritarianism), and an overwhelming though somewhat unjustifiable confidence in his own abilities.

Whether or not Trump, say, funds Planned Parenthood, matters little to his supporters who are either devoid of political passions, or have abandoned whatever political principles they once had for the sake of being on ‘the winning team.’ As I wrote at LegalInsurrection.com for its popular, “Trump is the Nominee, What Now? Legal Insurrection Authors Debate” thread:

Like baseball fans who wear “My Favorite Team Is Whoever Is Playing The New York Yankees” t-shirts, seeing Hillary and the Dems defeated has become, to many, even more important than by whom or by what means they are so. It matters little to most Trump supporters that he holds or has held positions similar to Hillary’s views on almost every conceivable issue, or that a Trump administration would be surprising similar to a Hillary Clinton administration. What is of paramount importance is that Trump be the winner he has brilliantly marketed himself to be.

Trump has been a salesman most of his life. He is well-practiced in selling everything from mortgage companies to casinos to golf courses to multi-million dollar apartments to even steaks and bottled water. He is especially talented in selling his most important asset — himself. Like a holy man with a private helicopter, Trump has persuaded his devotees that through anything is possible. More than any set of beliefs he has, it is due to Trump’s ability to sell himself that Trump voters support him.

Conservatives are cut from a different cloth. We are not known to seek holy men, nor do we easily compromise our ideals. Progressive voters may look to someone to be “The One,” a political messiah to deliver them to their promised land, but Conservatives are principled voters who support candidates based upon their adherence to those principles. The more conservative the candidate is, the more we like her/him. And vice versa. Conservatives did not support Cruz because they were awed by his charisma and stump speeches. Conservatives supported Cruz because he was a conservative.

This distinction was best explained in Demonic: How the Liberal Mob Is Endangering America which states, “The mob characteristic most gustily exhibited by liberals is the tendency to idolize their political leaders, while considering ‘as enemies all by whom [their beliefs] are not accepted.’” The book also adds, “Conservatives … like Republicans, we like many things about Buckley, Reagan, and Goldwater. They’re not God. Not even Reagan.”

Ironically, the author of Demonic is none other than “conservative” Ann Coulter, who so idolizes Donald Trump that she tweeted that a foreign policy speech he delivered was the “GREATEST FOREIGN POLICY SPEECH SINCE WASHINGTON’S FAREWELL ADDRESS” almost before he had finished delivering it, and whose forthcoming book is rumored to be entitled, In Trump, We Trust.

If we are to be honest, it is not simply a matter of Trump’s campaign not being tethered to anything beyond Trump’s ability to self-promote and his progressive instinct that bothers Conservative voters. Frankly, Conservatives just don’t like him. According to recent data, 69% of Cruz supporters say they do not like Trump, and only 62% of them say they would vote for him. Amazingly, 13% of Cruz-ers — the most conservative voters in the country — say they would rather vote for Hillary Clinton than their presumptive nominee.

Much of this dislike of Trump is derived from how Trump treated these voters’ favorite candidate. For example, many supporters of Carly Fiorina – the people who put on the buttons and put up the lawn signs and sent $25 to her campaign – were as offended as Ms. Fiorina must have been to hear Trump mock her face. Such an insult will make it harder for them to place an X next to Trump’s name come November.

That’s why it was so interesting to see Newt Gingrich mock #NeverTrumpers recently, because Conservatives rallied to Gingrich’s 2012 presidential campaign much the way they supported Ted Cruz in 2016. Although there was harshness between the two, with Gingrich famously calling Romney a liar, Gingrich did endorse Romney, which helped most (although not as many as I would have liked) Conservatives supported Mitt Romney as well.

Could Gingrich have endorsed Romney if “Lying Newt” was a regular applause line during Romney’s campaign speeches, or if Romney insulted Newt’s wife and father? Maybe not. Many primary campaigns have seen the rhetoric of candidates boil over into vitriol. But no candidate in my memory has used insults, – not as a reaction – but as a tactic.

If Conservatives find Trump to be a Progressive who they personally dislike, then there is only one reason to vote for Trump, and that is to help him defeat Hillary Clinton. But even this reason isn’t compelling.

Hillary is running on the legacy of one of the nation’s least successful presidents. She has such a history of dishonesty that she once claimed to have escaped sniper fire at a Bosnian airport until video proved that instead of gunshots she was greeted by a flower girl. So unpopular is she that she is struggling to defeat a 74 year old largely unknown socialist in her party’s primary.

Trump, with his great appeal among non-ideological Republicans, Independents, and even Democrats, doesn’t need Conservatives, as he has admitted. Rather than court Conservatives, Trump seems to be shifting to the Left.” As Glenn Beck asked Ted Cruz recently, “How do we get behind a group of people who don’t have any interest in asking Conservatives for their vote?”