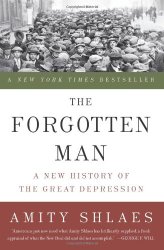 The Forgotten Man, Amity Shlaes’ famous history of the Great Depression, actually takes its title from another book, which was written by libertarian philosopher, William Graham Sumner, and titled What Social Classes Owe To Each Other.

Published in 1883, Sumner used the term “The Forgotten Man” to distinguish the men who are the creators of government’s massive social welfare programs, and those who chiefly benefited from them, from the forgotten, or the men and women who with their taxes and labor bore the price of these programs.

As Sumner writes, “The State cannot get a cent for any man without taking it from some other man, and this latter must be a man who has produced and saved it. This latter is the Forgotten Man.”

Today Sumner would see that the Forgotten Man may not be the same man he was in the 19th century, but he has not disappeared, nor have the demands placed upon him been made any less cumbersome.  As our progressive state continues to demand sacrifice for an increasing stream of social policies and programs that will not benefit him, he continues to be the one who must bear the weight.

He is the inner city teenager who searches, perhaps, for a fast-food job to supplement his family’s income, but finds many of those jobs being given to illegals.

He is the worker who is seeking a high paying energy job, only to find politicians — in the name of the deception that these jobs will cause kitchen faucets to become flame throwers — have prevented their creation, though he will still find that he must pay his share of the three billion dollar tab left from heavily taxpayer subsidized “green companies” going bankrupt.

He is the senior who wants to supplement his retirement income by working at a retail job but finds that because employers must reduce hiring to avoid Obamacare penalties and to offset a higher minimum wage, those jobs have become increasingly scarce.

He is the taxpayer who must pay $50,000 per Obamacare enrollee, according to the Congressional Budget Office and his own premiums increasing.

Or he is the STEM worker whose wages have remained frozen for decades, but is grateful for the opportunity to work in his field as the government and Big Business interests continue to lobby to have him replaced with less expensive foreign workers with H1-B visas

Clearly Obama, despite his State of the Union shout-out to his political operative Rebecca, has put in place that have made it harder for these men. But unfortunately, their problems can not be blamed solely on the Left.  Numerous Republicans, such as Senator Bob Corker, who ran for office with tax pledges to lower taxes, now line up to impose a gas tax that will not only be massive but regressive as well. Another 10 cents a gallon will be very little to the man who is getting a $7500 tax rebate for buying a new $130,000 Tesla, but it means a great deal to the Forgotten Man.

As economic professor (and AACON guest) Peter Morici wrote “The [December 2014] unemployment rate fell to 5.6%, but that may only be because so many working age Americans quit looking for work and are no longer counted in the official jobless tally. If the same percentage of adults were in the labor force today as when Presidents Obama took office, the jobless rate would be about 9.9%.”

As The New York Times put it: “Working, in America, is in decline. The share of prime-age men — those 25 to 54 years old — who are not working has more than tripled since the late 1960s, to 16 percent. More recently, since the turn of the century, the share of women without paying jobs has been rising, too. The United States, which had one of the highest employment rates among developed nations as recently as 2000, has fallen toward the bottom of the list.”

He is made more expendable by technology. Companies like Amazon are building robots which can eliminate the need for thousands of warehouse workers at companies, and the computer screens will eventually replace cashiers at McDonald’s the way ATMS have replaced bank tellers. Financial Advisor quotes a study that claims 47 percent of workers could be put out of work by robotics. “If you have self-driving automobiles, will you need cab drivers, truck drivers, auto insurers and chiropractors?”

However, the consequences of such a large segment of society not working has not yet been fully seen, although we have seen glimpses of what that would portend. The Heritage Foundation, in their most recent Index of Dependence on Government, writes “America is increasingly moving away from a nation of self-reliant individuals, where civil society flourishes, toward a nation of individuals less inclined to practicing self-reliance and personal responsibility. Government programs not only crowd out civil society, but too frequently trap individuals and families in long-term dependence, leaving them incapable of escaping their condition for generations to come. Rebuilding civil society can rescue these individuals from the government dependence trap.”

Perhaps it will be more than increased government dependency. At the economic summit in Davos, the experts bemoaned the youth unemployment in nations like Italy of more than 50%, and reminded that high unemployment rate in Greece were partially responsible for their 2008 riots. In the US, there are counties in which the non-employment of men ages 25-54 is as high at 74%.  And many of the counties with high employment are so because of drilling jobs which are disappearing now that oil is selling for less than $45 a barrel.

Liberal economists and politicians are fond of obsessing over the income gap, but ironically they continue to favor the Quantitative Easing and low-interest rates remedies that have exasperated the gap. Perhaps their proclamations of social unrest caused by the income gap are not as sincere as they pretend. If they were, they would warn less about the societal effect of having a working class of CEOs who can earn more in a day than his employees can earn in a year, and more on the societal effect of having a working class that is no longer working.