For the first time in my adult life, I am not proud of my country.

Here’s just a few things that are happening to commemorate the deaths of 2,000-plus people nine years ago today:

I’m throwing out the clowns who want to burn the Koran, because they really don’t rate any intelligent discussion from me (and because I’ve argued it enough among my friends this week). As for the other two events…maybe it’s just me, but 9/11 just doesn’t seem like a day for celebrations of any sort.

…Have we forgotten what happened eight years ago today, or has the political environment we live in today caused us to “move on” from 9/11?

Has the desire for “hope and change” veiled us to the reality that we all learned eight years ago? As time removes us from that day, do we forget the 3,000-plus reminders that our freedom, while the envy of some, is an enemy to more?

I can answer that question, now.

I don’t think we as a country have forgotten what happened on 9/11; I’m not sure we actually could. I think, though, that as time passes and the wounds of that day try to heal, many people have just moved on from the events of that day. We lower our flags to half-mast (or some people do; you’d be surprised at the number who don’t), have our moments of silence at the times where the planes hit and/or the towers collapsed…and that’s it. If you live outside of NOVA (that’s “northern Virginia” for the uninitiated), New York or Shanksville, it’s almost like nothing ever happened.

And I’ve got a problem with that…the complacency of it all.

In response to my thoughts last year, one of my high school friends said this:

…It is comforting to wake up on September 11 and have my toddler’s babbling first on my mind, instead of the horrors we witnessed. For as much as those attacks showed us what evil there is in the world, they also showed what kind of goodness, of compassion, of caring there is, and keeps hope alive that maybe, just maybe, our children can have a bright future after all, if we would only focus on that side of the event.

Both of my kids were born after 9/11 as well, so I get that. Kids do bring about a sense of innocence and hopefulness that are always encouraging, especially today. And yes, the goodness, compassion, and caring that all Americans-and really, people across the world-showed nine years ago does inspire the hope for a better future for mine and other’s children. Before we got to that point, though-where we came together as a nation across racial, gender, religious, and political lines-a lot of people lost their lives in the most barbaric act that my generation-and my country-have ever seen. We’d do well to remember that, for the families of those killed on 9/11, the day is held for solemn remembrance.

Is it asking too much for us as a nation to stop and remember what happened on 9/11, beyond the perfunctory moments of silence? Yes, be inspired-and hopeful-for what our nation did in the days after, because there are plenty of moments that will lead you to do just that.

But remember the sobering reality that brought us to that point:

On that morning, 19 al-Qaeda terrorists hijacked four commercial passenger jet airliners. The hijackers intentionally crashed two of the airliners into the Twin Towers of the World Trade Centerin New York City, killing everyone on board and many others working in the buildings. Both buildings collapsed within two hours, destroying nearby buildings and damaging others. The hijackers crashed a third airliner into the Pentagon in Arlington, Virginia, just outside Washington, D.C. The fourth plane crashed into a field near Shanksville in rural Pennsylvania after some of its passengers and flight crew attempted to retake control of the plane, which the hijackers had redirected toward Washington, D.C. There were no survivors from any of the flights.

This isn’t just another day…and it never will be.

A blogger, Navy veteran, and activist, Coby W. Dillard seeks to apply conservative solutions to the problems of urban and inner city environments. He has worked with many grassroots organizations and is a co-founder of the Hampton Roads Tea Party. In 2009,  he worked on Gov. Bob McDonnell’s campaign as the director for veteran and African American outreach before briefly pursuing the Republican congressional nomination earlier this year in Virginia’s 3rd district.

Coby and his family live in Norfolk, where he is completing his undergraduate degree and working as a consultant. 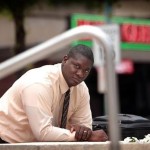 We give power to the terrorists when we shut down our country on September 11th. Why give them that power? We should not only continue with our lives and show them that we will not be bullied, but we must also demonstrate that we have the resolve to continue to prosper in spite of their attacks on our financial, political and military institutions. If anything, we show considerable restraint in not mass bombing terrorist sites on 9/11 which makes me quite proud of my country. (We may do some sneaky things like quietly sign massive missile contracts on 9/11, but that’s also a symbolic act.)

Fly your flag-staff. Throw a party. Pray in an inter-faith setting. Make some money. Don’t let them win.